Below we outline the production rates for mealworms using both large scale (commercial) and small scale production (hobbyist):

Small Scale production rates are less than the amounts mentioned above and is dependent on the system in place. Small scale production is highly variable both in setup, temperature and user skill.

Temperature is the main issue which will reduce production rates, and the other issue is mould which is very common. The main reason for mold is that the temperature falls below the dew point due to no heating, which creates moist conditions which encourages mold development. 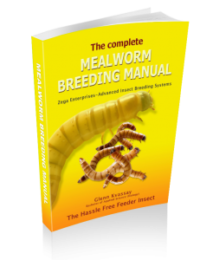 How to Breed Mealworms

Many Factors affect mealworm production rates mentioned above. For many years we kept doing things similar and then we changed just one factor and we doubled production. It wasn’t at first obvious…so learning from other peoples experience will save you years in trial and error. Below are some of the main considerations which affect production rates:

If you need help to set up a commercial insect farm which accounts for the above factors then visit our Commercial Insect Breeding section. We have Consultancy and Partnership programs to help people set up insect farms.

How to Breed Crickets

We have been breeding insects to Zoos, Wildlife carers, pet stores and the public for over 14 years.  We have articles, books, videos, consultancy and Partnership programs. For Information and advice on commercial production, click Here. Our Cricket Breeding Manual (see below) is the most comprehensive private and commercial breeding guide available.

The Worlds most Comprehensive Mealworm Breeding Guide and Videos

With around 160 pages and 240 color photos our insect breeding book series set the benchmark for insect breeding. To see why our book is the most comprehensive book you can buy on the topic, click Here  or to purchase click Here. In this link we will provide you with:

Innovative methods now mean you can breed crickets that:

For more information on how to breed crickets, get your free 9  lesson  today.  This training course has videos and lots of useful information which covers:

We are Converting a Caravan into a Profitable Insect Business..